Celestron CGEM II 800 EdgeHD Telescope combines Celestron’s newly redesigned CGEM II computerized equatorial mount with its acclaimed EdgeHD optical system. With 8 inches of aperture and our premium StarBright XLT coatings, the CGEM II 800 HD gives you over 800 times the light gathering power than the unaided eye and is the lightest and most portable telescope in its class.

See the Universe in HD

EdgeHD is an aplanatic, flat field Schmidt-Cassegrain telescope that produces aberration-free images across a wide visual and photographic field of view. The optical system was designed to reduce more than just off-axis star coma; it also provides an astrograph-quality flat focal plane all the way to the edge of the field of view.

Many optical designs that advertise themselves as “astrographs” actually only produce pinpoint stars across a curved focal plane. While this may be acceptable for some visual observing, stars will appear out of focus at the edge when used with the flat chip sensor of a digital camera. EdgeHD optics produce a focal plane more than three-times flatter than a standard Schmidt-Cassegrain telescope and dramatically flatter than competing coma-free designs. This guarantees you visibly sharp stars across some of the largest CCD chips available today. Learn more about EdgeHD technology.

Superior edge performance not only creates rounder, more pleasing stars, but actually improves the resolution and limiting magnitude when compared to telescopes of equal aperture. With Celestron’s StarBright XLT optical coatings on every surface, EdgeHD optics gives you maximum light throughput across the widest visual and photographic spectrum.

In addition to Celestron CGEM II 800 EdgeHD Telescope optimized optical design, the telescope tube has been redesigned to make sure you get the most from your optics each and every night.

Mirror clutches – Flexible tension clutches hold the mirror in place and reduce image shift when taking long exposure astro-images. Once focused, the flexible rods allow the mirror to be held in place without putting any force or pressure on the mirror assembly, keeping the image centered in the eyepiece (or on the sensor).

Tube vents – Cooling vents located on the rear cell allow hot air to be released from behind the primary mirror. Each vent has an integrated 50-mesh filter guaranteed to let warm air out without letting dust in.

Celestron CGEM II 800 EdgeHD Telescope is the most versatile imaging telescope available today. At its native f/10, you can achieve the image scale necessary to capture the smallest of deep sky objects. Add the optional reducer lens—custom-designed for your size EdgeHD tube—and you can increase your field of view without sacrificing optical performance. A Barlow lens gives you added power for high-resolution planetary, lunar and solar imaging. All EdgeHD optical tubes are Fastar-compatible, allowing the secondary mirror to be removed and replaced with a third party lens accessory for ultra-fast f/2 wide field imaging.

Every EdgeHD that ships has been tested not only for the surface quality of each optical component, but also with a camera and artificial star to ensure the imaging system meets our rigid quality assurance. This “final acceptance test” confirms the EdgeHD will perform in the field and deliver high-quality astroimages.

A fresh update to the venerable CGEM mount, the Celestron CGEM II 800 EdgeHD Telescope has a fresh, attractive, bold appearance and is capable of carrying Celestron’s higher-end SCT optical tubes (up to 11″) securely and vibration free, which is ideal for both imaging and visual observing. Capable of holding 40 lbs. of payload and slewing at 5° per second, you will be able to instantly point to any of the celestial objects in the database.

CGEM II was designed to be ergonomically friendly with large Altitude and Azimuth adjustment knobs for quick and easy polar alignment adjustment. The internal RA and DEC motor wiring provides a clean look and an easy and trouble free set up.

The CGEM II series features Celestron’s innovative Polar alignment procedure called All-Star™. All-Star allows users to choose any bright star, while the software calculates and assists with polar alignment. Another great feature of the CGEM II sure to please astroimagers, is the Permanent Periodic Error Correction (PEC) which will allow users to train out the worm gears periodic errors, while the mount retains the PEC recordings.

For objects near the Meridian (imaginary line passing from North to South), the CGEM II will track well past the Meridian for uninterrupted imaging through the most ideal part of the sky. The CGEM II mount has a robust database with over 40,000 objects, 100 user defined programmable objects and enhanced information on over 200 objects. Celestron CGEM II 800 EdgeHD Telescope mount is the perfect fit between the Advanced Series and CGE Series. Offering the portability of the Advanced Series and the precision of the CGE. 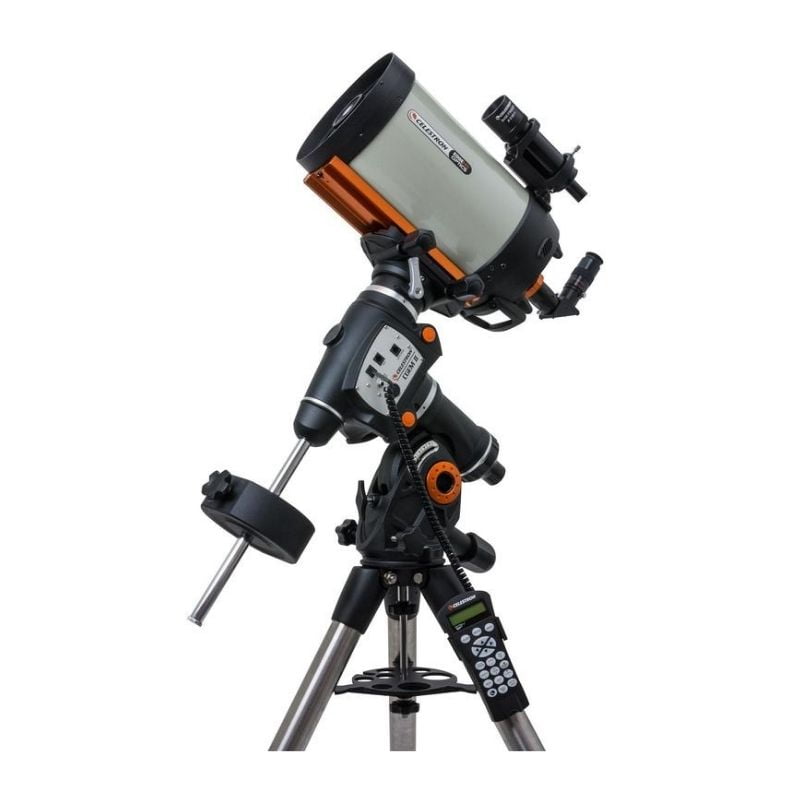