Celestron has reinvented the manual telescope with StarSense Explorer—the first telescope that uses your smartphone to analyze the night sky and calculate its position in real time. Celestron Starsense Explorer DX 130AZ Reflector Telescope Smartphone App is ideal for beginners thanks to the app’s user-friendly interface and detailed tutorials. It’s like having your own personal tour guide of the night sky.

Leave complicated star charts, imprecise planetarium apps, and computerized mounts behind. With Celestron Starsense Explorer DX 130AZ Reflector Telescope Smartphone App, locating objects has never been easier, faster, or more accurate. Within minutes of setting up the telescope, you’ll be navigating the sky with confidence. Simply place your phone in the unique StarSense dock and launch the StarSense Explorer app. After aligning your phone to the telescope’s optics (a quick, 2-minute procedure), StarSense Explorer generates a list of celestial objects currently visible. Make your selection and arrows appear onscreen, guiding you as you to move the telescope. When the object is ready to view, the bullseye turns green.

Celestron Starsense Explorer DX 130AZ Reflector Telescope Smartphone App works with most modern smartphones, including iPhone 6 and up and most devices running Android 7.1.2 or later manufactured since 2016. For a complete compatibility list, click here.

Celestron Starsense Explorer DX 130AZ Reflector Telescope Smartphone App uses patent-pending technology and your smartphone to determine exactly where the telescope is pointed in the night sky. A Lost in Space Algorithm (LISA), like the ones satellites use in orbit to correctly reorient themselves, helps the app match star patterns it detects overhead to its internal database.

While other astronomy apps may claim that they can help you find objects, they rely exclusively on the phone’s gyros and accelerometers, which aren’t as accurate as LISA technology. No other app can accurately tell you when your target is visible in the eyepiece.

An ultra-stable altazimuth mount provides a sturdy foundation for StarSense Explorer DX. Slip clutches and geared slow motion controls in both axes help you move the telescope smoothly and zero in your target. As celestial objects appear to drift across the night sky, you’ll be able to follow them with just a turn of the knobs. It’s all anchored by an adjustable, full-height tripod.

With a large 130mm (5”) objective lens, this telescope has enough light gathering ability to bring out impressive detail in celestial objects. You can expect sharp, bright views of Jupiter’s four Galilean moons, its cloud bands and Great Red Spot, the rings of Saturn, the trapezium in the Orion Nebula, and beautiful Pleaides Open Star Cluster. Highly reflective coatings on both the primary and secondary mirror enhance the views even more.

Perfect for the City or Dark Sky Sites

Even if you live in a light polluted city location, Celestron Starsense Explorer DX 130AZ Reflector Telescope Smartphone App is advanced enough to be able to pick out Jupiter, Saturn, Venus, the Orion Nebula, double stars, and a few more of the most famous celestial objects.

But if you can take the telescope to an even slightly darker location, more objects will become visible. With this 5” Newtonian and relatively dark skies, the Andromeda Galaxy, Hercules Open Star Cluster, and so many more are easily within your reach.

The entire telescope kit weighs just 18 pounds, so it’s perfectly portable and easy to bring on your next camping trip or to a remote observing site.

Everything You Need to Observe Immediately

When you unbox your new StarSense Explorer DX, you’ll find: 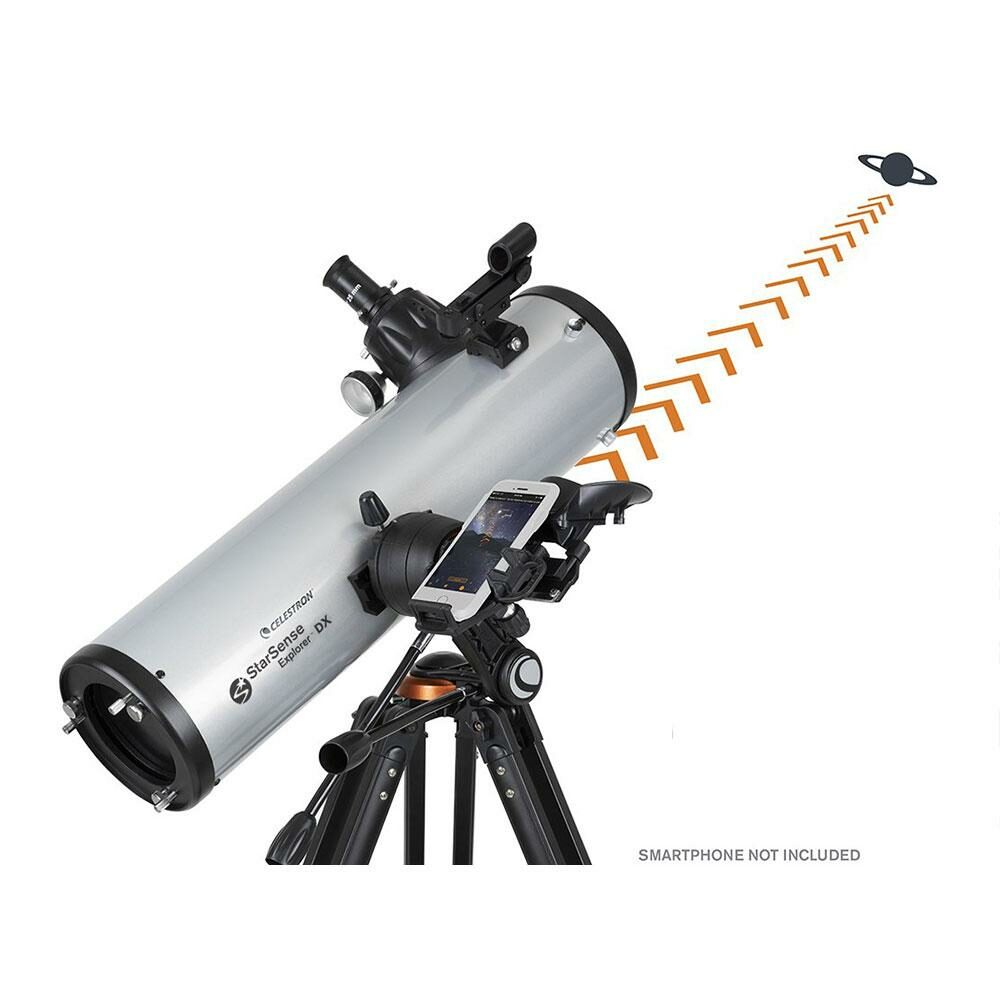